This private Morocco tour will take you through Casablanca, Asilah, Tangier, Chefchaouen, Meknes, Volubilis and Rabat. Listen to a local university teacher relate tales of pirates capturing European nobility in Sale. Discover the colorful  medina  of Tangier with a view on the Atlantic, praised by Delacroix, Matisse and the ‘beat generation’. Become a child again in the fairy- tale azure streets of Chefchaouen. Stroll among Phoenician and Roman ruins at Chellah and Volubilis. Unwind in the dreamy fishing village of Asilah with its prize- winning architecture and unspoiled beaches. We recommend this itinerary all year round but ideally so during summer, to keep you away from the high temperatures further south. Additionally, you may also be interested in our Marrakech, Atlas and the coast tour. Below you will find the detailed itinerary. As with all our tours, this itinerary is a mere example and will be customized to suit your taste and schedule. To enquire about availability and rates, please send us an enquiry. To ensure availability, we recommend booking at least 3-4 months in advance.

DAY 1: CASABLANCA / RABAT – ASSILAH ( 4 – 5 hour drive). We will collect you at the airport or your hotel in Casablanca or Rabat. On our way to Rabat, along the Atlantic coast, we can stop and visit the exotic gardens of Sidi Bouknadel or the bird reserve in Mehdya. There is hardly a better place for lunch than the village of Moulay Bousselham, right on the Atlantic coast where your driver will arrange for freshly caught sea food or fish to be grilled right in front of you and have an impromptu meal along the locals. Follow that with a boat ride into the lagoon. Time allowing, stop in Lixus and visit the Roman ruins or in Msoura to admire the Megalithic stone circle, a sort of Moroccan Stonehenge. Arrive in Asilah in the evening. Dinner and accommodation in Asilah. 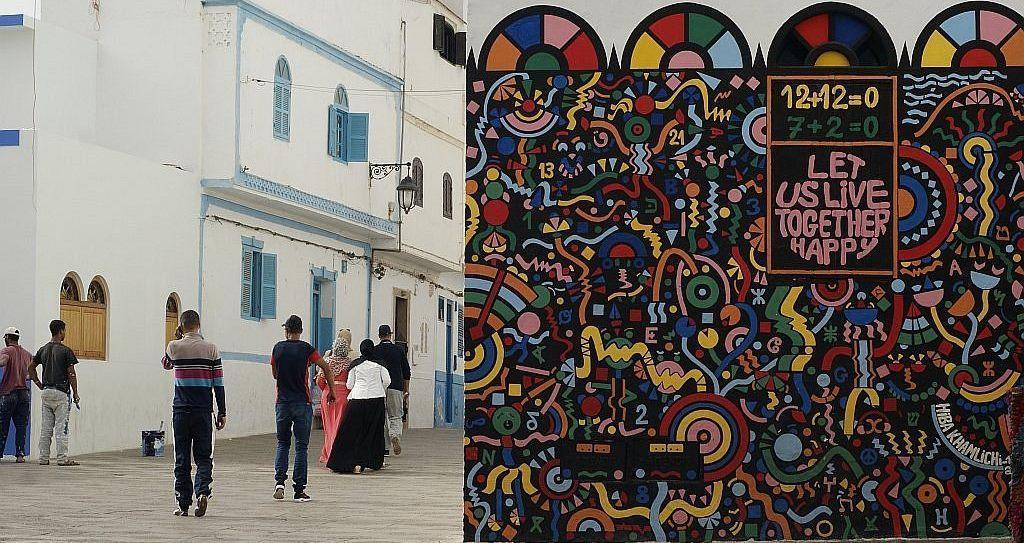 DAY 2: ASILAH. After breakfast on the roof terrace, have a stroll around one of the most beautiful and well- kept medinas of Morocco, dating back to 10th century that owes its present shape to the Portuguese who occupied it for a few decades back in the 15th century. More recently, in 1989 it was awarded the Aga Khan prize for architecture. Much of Asilah’s transformation can be traced to 1978, when two local friends invited artists to paint murals on the medina’s peeling walls. That creative impulse soon gave birth to the International Cultural Moussem of Asilah, a summer festival with concerts, design lectures, poetry readings, and artists who arrived from all over the world to cover the whitewashed city with colorful, elaborate graffiti. The festival takes place every summer ( dates change due to Ramadan) and now draws a crowd of 100,000 people, turning the town into a vibrant open-air museum and creating a street scene that’s picturesque enough to rival Morocco’s famously blue city of Chefchaouen. In the mornings, the sound of waves drifts over the restored  ramparts, mixing with the rhythmic tones of streets being swept and the scent of freshly baked bread. We recommend you to enter the numerous art galleries and then spend some time by the unspoiled beach south of Asilah or try your hand at Arabic calligraphy with a local maalem. Dinner and accommodation in Asilah.

DAY 3: ASILAH – TANGIER ( 1 hour drive). Our tour of northern Morocco leaves Asilah and follows the Atlantic coast as you soon enter the urban area of Tangier. Penetrate the intricate medina of Tangier and before long, pass the gate of the Kasbah. Drop the luggage in your Riad's room and go out to explore the medina with a local guide. Start perhaps with the Marshan district and its Roman tombs. Before entering the old town, stop for a refreshing break and admire the Moresque interiors of St Andrews church. Follow up with a visit to a local artisan cooperative where the maalems are busy working the looms. Cross the fish market where fresh fish is sold at auction to arrive to the Jewish cemetery, dominating the sea front. Next stop, the American legation, the first American property to ever open outside the United States. Descend onto Petit Socco and have a mint tea at Cafe Tingis, a favorite with the Beat Generation. A few streets further away push the door of the local synagogue ( closed on Saturdays). Make your way up the intricate streets and step back into the Kasbah district. There is no better end to the day then having a drink on a roof terrace dominating the whole medina, at the time when the sun drowns into the Atlantic. Dinner and accommodation in Tangier.

DAY 4: TANGIER – TETOUAN – CHEFCHAOUEN ( 2 hour drive). On our way to Chefchaouen, we can linger for a while in Tetouan and awe at the Mauresque heritage present in its patios and palaces. Erected on an ancient Roman site, Tetouan was completely destroyed during the 15th century by the Portuguese. The fall of the kingdom of Granada in southern Spain in 1492 marked the renaissance of Tetouan. More than its architecture, the cuisine, the music, the jewelry or the embroidery speak of their Andalusian origin. And where the Moresque heritage can be admired in all its glory is the Ethnographical museum. But perhaps you want to head straight to Chefchaouen so you can spend more time there. Still, you’d be a fool to miss the dramatic gorges of Oued Laou, connecting the Mediterranean beaches to the azure town.

Quite likely the most charming village in Morocco can’t leave anyone indifferent. We could tell you that the kasbah built in the 15th century is worth a detour or that you should try to track down the still- working watermill or the district farnatchi oven, but Chefchaouen is about loosing yourselves in its streets without any precise goal. Inside the ancient gated medina nearly every building is painted an arresting shade of cerulean or azure, the sky blues juxtaposed with white trim and terra-cotta rooftops. Twisting cobblestone paths lead up and up, around the ocher-colored casbah to a landscape of green hills and mountaintops, uninterrupted sky extending beyond. Great trekking opportunities are also present in the nearby Rif Mountains, for a few hours or a whole day, along the river and up to the waterfalls, or further on, to the Bridge of God. Dinner and accommodation in Chefchaouen.

DAY 5: CHEFCHAOUEN – MEKNES – RABAT ( 6 hour drive). Our northern Morocco itinerary leaves Chefchaouen and the Rif Mountains behind to then descend onto Moulay Idriss, the holiest village in Morocco, where Moulay Idriss, a 5th generation descendant of Ali, son in law to Prophet Muhamed, arrived in the 8th century escaping the fight for power between the Omeyades and the Abbasydes at the court of Damascus. He was warmly welcomed by the Berber tribes and set out to establish the first Moroccan dynasty. The tomb of Idriss the 1st is still nowadays the object of a massive pilgrimage from all over Morocco. Only 3 miles from there, lays the Roman town of Volubilis, the best preserved Roman site in Morocco, capital of King Juba the Second, who came to marry the daughter of Cleopatra and Marc Anthony. Then, we continue onwards to Meknes, one of Morocco’s 4 Imperial Cities. Meknes became the capital of Morocco with the Sultan Moulay Ismail, who in the 17th century decided to change the capital from Marrakech to Meknes. To this task, he employed 55000 men, workers but also Christian slaves and dismantled the splendid Badi’ Palace in Marrakech to then carry most of it to Meknes on the back of camels. From this age, we were left with the imposing Bab Al Mansour, one of the most original gates in Morocco, the grain silos that, according to a chronicler of the age, could hold enough grains to feed the whole of Morocco, the House of the 10 Norias or the large open air basin where water was stocked so it could supply the whole town and was sometimes used for the army to train. Arrive in Rabat in the evening. Dinner and accommodation in Rabat. 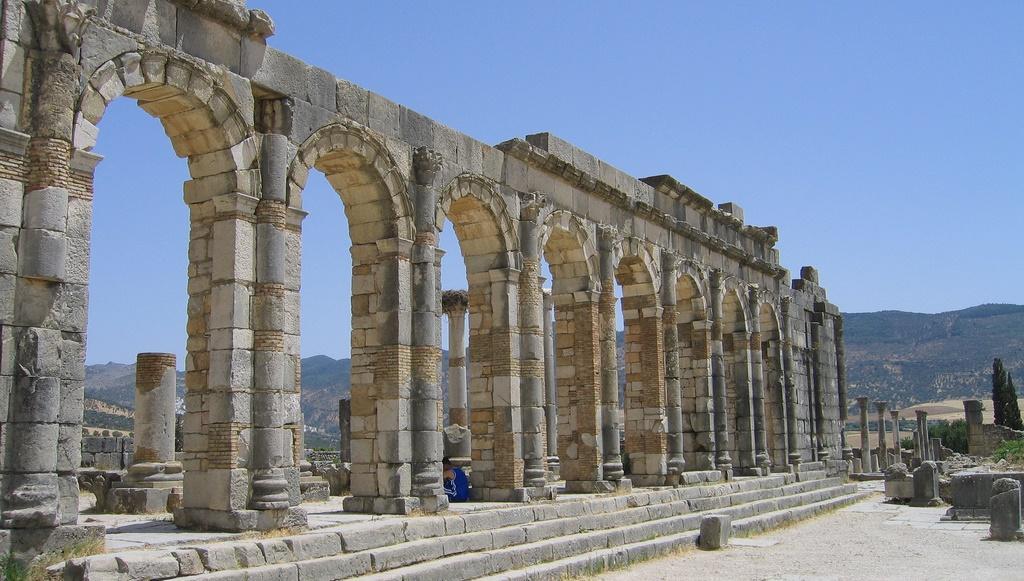 DAY 6: RABAT. Despite its appearance as a quiet administrative town, Rabat hides quite a few gems, having been included on the UNESCO world site list just a few years back. You should perhaps start your day with the visit of the 12th century Kasbah des Oudayas and its Andalusian Gardens, an important outpost of the Almohad dynasty, back in the 12th century. We can dwell further into the past and visit the Merenid necropolis of Chellah, where Phoenician, Roman and Merinid heritages blend. Sale, the town over the bridge, has a more intriguing story and was known for centuries as a pirates' nest. Canals used to run inside its gates and its pirates were famous for rapidly attacking European ships and taking illustrious nobility as prisoners. Once inside the city, the massive doors would close and the European powers had no other choice than to offer most generous prices for ransom. Some say that it is outside its shores that it inspired Daniel Defoe's Robinson Crusoe. Our local guide will tell you all about the fearsome pirates and the relations between Muslims, Jews and Christians inside a traditional medina.Downtown in Rabat, opened in 2015, Mohamed 6 museum offers a great insight into the Moroccan modern arts and holds international exhibitions to rival those of European museums. Dinner and accommodation in Rabat.

DAY 7: RABAT or RABAT – CASABLANCA ( 1h30 drive).
Depending on your flight location and schedule, we will arrange for the drop off accordingly. If flying out from Casablanca, you should seize the opportunity and visit Hassan 2 mosque, the third largest in the world.

We can always take away or add 1 or 2 days to this Moroccan itinerary to suit your schedule. Book or enquire about your private customized tour of Morocco here.

© Sun Trails 2016. All rights reserved. No part of this interview may be reproduced, distributed, or transmitted in any form, including photocopying, recording, or other electronic or mechanical methods, without the prior written permission of the publisher.

Our readers have also enjoyed these posts

What better place than Morocco for a private tailor made tour ? It can be a day trip from Marrakech into the Atlas Mountains. Or a 14 day private luxury Morocco tour. And everything in between. With such a different culture and language, a boutique 4x4 Morocco tour with an English speaking local driver- guide guarantees the best holidays in Morocco. Choose one of the many 4x4 tours from Marrakech or another imperial city and you will discover the off the beaten track Morocco. Much more than excursions from Marrakech or Morocco desert tours, our 4x4 custom tours travel all across Morocco, covering Berber villages, majestic Kasbahs, enchanting palm groves or Touareg desert camps. From Ait Benhaddou to Chefchaouen, from Erg Chebbi to Taroudant and from camel rides in the Sahara to hardcore trekking Morocco can only offer. Browse among our 4x4 boutique tours of Morocco and book your favorite today !